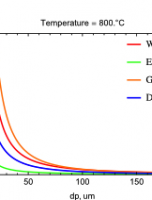 2015-04-22 -     Background  The drag force is the friction that a fluid imposes on an object, and the friction the object imposes on the fluid.  They are equal but opposite forces.  This two-way coupling of the drag force can best be demonstrated by driving with your hand outside the window.  You can feel the force on your hand.  However, your hand is causing the air flow to be disturbed as well.  In a fluidized bed, it is the drag force that... More detail
Particle Attrition and Erosion Program 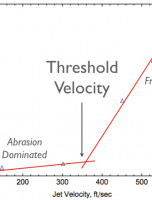 2015-02-18 -   Background  PSRI had conducted a long term research program to identify the major sources of particle attrition in both fluid bed and circulating fluid bed systems. In fluid beds, the major sources of particle attrition are identified as both submerged high velocity gas jets at grids and the first stage cyclone inlet region where the entrained solids are subjected to high centrifugal force which results in high impact across the inlet duct on the barrel wall. In addition to these... More detail
Standpipes 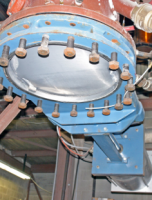 2015-02-18 - June 22, 2010 Standpipes have been in use for over 60 years.  The standpipe was invented by a research team from the Jersey Standard Company in the 1940s working on feeding cracking catalyst into fluidized beds to produce gasoline for the war effort.  The primary purpose of a standpipe is to transfer solids from a region of lower pressure to a region of higher pressure.  Standpipes are usually part of circulating fluidized bed systems.  In addition, cyclone diplegs are essentially... More detail
Cyclone Modeling and Design 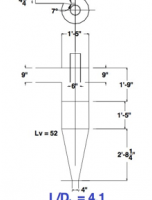 2015-02-18 - June 22, 2010 Cyclones have been used to separate solids from gas streams since the middle of the nineteenth century.  These devices are used in a variety of industry applications and cover a wide range of operating parameters.  Early researchers conducted experiments to understand the operation of cyclones and to develop design correlations.  Zenz (1975) developed an empirical procedure which has become a common basis for most cyclone applications.  Others including ... More detail
Bed Internals and Strippers 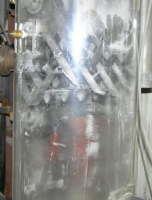 2015-02-18 - June 22, 2010 Internals are added to fluidized beds for several reasons.  The most common reason is to add heat or to remove heat from a bed using horizontal or vertical heat transfer tubes.  Another common reason is to add internals to strippers to stage the bed in order to improve stripping efficiency.  It is also becoming increasingly evident that the addition of internals can improve the operation of fluidized bed reactors.  Some examples are: 1) adding internals (baffles)... More detail
© 1971 - 2022 Particulate Solid Research, Inc